Angola - does NOT work - both players are forced onto same team

So I have tried various Angola versions with various Vassal versions going back to 3.2.17 in mid 2020, I have tried PCs and Apple OS and still the problem persists in all circumstances. The problem is this: regardless of the faction you select your opponent is semi-locked into that too. What do I mean? Well if I join as Soviet I can see the Soviet buttons and open them, when my opponent joins and selects Western, he comes in as Soviet. When he changes from Soviet to Western, he can then see the Western buttons and access them. I remain able to see the Soviet buttons but I cannot open them, clicking them has no effect (the Western buttons are greyed out). However, when I go to retire, it says I am Western and would I like to switch so I switch to Soviet. I can once again open the Soviet menus from the now working buttons but now my opponent can no longer use the illuminated but useless Western buttons. If he “changes to Western” (he should still be Western) he gains access to those buttons again but once again my Soviet buttons are not greyed-out but once again inoperable. We have had to do this merry-go-round just to get the game played, but it is far from ideal. What on earth is going on that once one side chooses a side it drags the other player along (but not fully as they remain unable to see the opposing side’s buttons or use them, but it’s far enough along that Vassal recognises them as changing sides i.e. “you are Soviet” but not so far that it doesn’t grey out the Western it just makes them do nothing). It’s simply bizarre… Any ideas? I had hoped an old Vassal engine and an older Angola module may work but nope the problem persists on all the combinations I tried and the problem is identical and 100% repeatable. It would seem no one around my area are able to play Angola at all on Vassal without this nightmare workaround of resigning every time you want to access a menu… Any ideas?

This has all the signs of the two players having identical module passwords. Each player should set module passwords that are unique. Both you and the opponent should open the module, then go to File → Preferences → Personal tab and see if your passwords match.

If you and the opponent had both skipped the “set a name and password” dialog when opening this module for the first time, you both would’ve ended up with blank passwords and gotten this problem. No idea if that’s how it came to pass, but it’s one possibility: 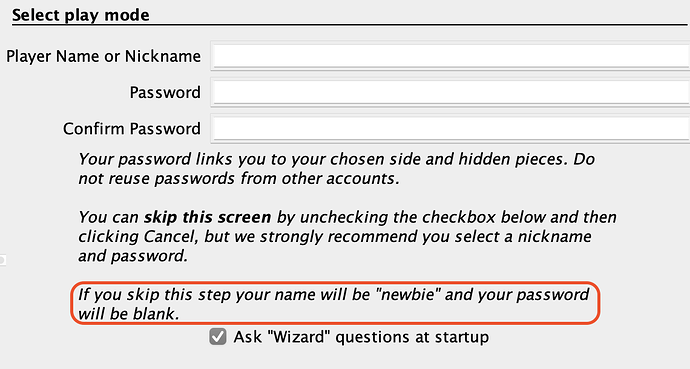 Failing that, there was an obscure situation that I can’t recall whether or not it got patched–if the module creator had a blank password when they created the module predefined setups, that would result in this behavior as well. I can look at the module and see if that’s the case. EDIT: this module has no predefined setups, so I’ll be very surprised if it’s anything other than the 2 players having identical passwords.

Thank you Joel, I cannot believe my friend and I both use the same password. I just changed it on my laptop and desktop and it worked fine. I checked with Josh and yep he has the same password as me. I am going to have to start using a more unique one. This is really helpful thank you.

I cannot believe my friend and I both use the same password.

Wow.
Even if two presumably unrelated individuals living apart happen to decide to use a simplistic password (eg., abcd, 1234, or something similar), which is certainly possible, I still find it astounding that they would both end up using the same one. The odds would seem astronomical against this happening.
It would be interesting to know the reasons that led both of you to the same password.
Also, since you both presumably changed your password and no one here is presumably privy to your game, what was this magical password? Sorry, but curiosity is really getting the better of me, haha.

I regret to inform you, it’s nothing so spectacular, we both used “a” lol so the odds are a lot shorter than you may think. But I’ve used that with all my Vassal modules including against this friend and its never been an issue. I’m going to use a new much longer password now so this never happens again.

The odds would seem astronomical against this happening.

Not nearly as high as you’d think. An astounding (to me) number of users simply don’t bother reading the first-time user/password dialog I shared above, and just cancel to bypass it and dive in. I’ve already supported 3 different pairs of VASSAL PBEM Discord users in the last few months who had both done this, thereby unknowingly setting newbie as their password and linking up to play with someone who had done the exact same thing.

Not nearly as high as you’d think. An astounding (to me) number of users simply don’t bother reading the first-time user/password dialog I shared above, and just cancel to bypass it and dive in. I’ve already supported 3 different pairs of VASSAL PBEM Discord users in the last few months who had both done this, thereby unknowingly setting newbie as their password and linking up to play with someone who had done the exact same thing.

OK, I get that, because both players let the program use its default. But in a case where both players typed in a password, it’s much less likely that they would both use the same one.
Even a single-character password consisting only of the letter “a” being used by both players is still somewhat uncanny to me.

It’s a fairly well known fact in the cybersecurity community that many users will select trivial passwords (e.g., “password”) unless there are enforced complexity rules.

While I don’t think we should have enforced complexity rules in Vassal, I do think uniqueness should be based on UID+password and not just password.