Changing the name of a module

I noticed that you can’t seem to edit the actual name of a module once it’s been uploaded. I’ve spent a while updating the Band of Brothers: Screaming Eagles module for designer Jim Krohn and publisher Worthington Games to include the new game in the series, Ghost Panzer. It’s uploaded fine.

While logged into the wiki, you’d use the “Move” link in the lefthand column.

Be forewarned that this will just result in a wiki editing war between you and one of the other moderators here who aggressively renames all modules according to the game’s name as it appears on Boardgamegeek.

The one module now does contain two standalone games in Jim’s BoB series. The next ones are heading to the Pacific Theatre of Operations so I’ll make a completely new module for those two. Thanks for your help.

While logged into the wiki, you’d use the “Move” link in the lefthand column.

Can you post a screenshot indicating where this option exists?

Using the move link in the context shown would move (i.e. rename) the entire module page.

Amazing, thanks! Would the old-named page still hang around?

I only have these options. I am logged in. Thoughts? 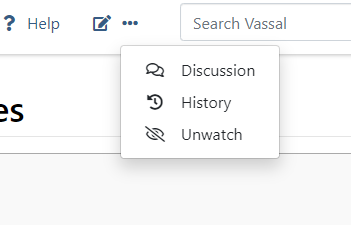 Old-named page would not remain around (it would have been moved to the new name).

I guess maybe Move might be admin-only in current version.

I guess maybe Move might be admin-only in current version.

Bummer. Is there a way to request this of an admin?

Yes start a new topic explaining what module you want renamed, and the reason for it.

Note the above discussion that there is a history of using the Boardgamegeek name as the official module page name.

Understood, thanks! My goal is to update the module to match the BGG name, so we should be all good there.

As above, I’ve long been on record as thinking this is a poor practice–and this nonsensical BGG game renaming campaign being prosecuted by moderators run amok is a prime example of why (even though it occurred years after my gripe).

Oh, wow. I had not realized that they were completely off their rockers at BGG. Games usually have clear titles. There’s no reason for us to care what someone at BGG thinks a game’s title is.