(Apologies in advance if this has already been discussed - for sure the “show grid” part was already a request of mine time ago - still getting used to the new website/forum layout.)

It would be very useful to have the ability to turn on/off displaying a map grid, like having “Show grid” follow a global property in place of the current checkbox.

Similarly, it would be nice to have Grid Numbering follow a global property as well, in place of the current “Draw numbering” checkbox.

This way one could add a button to the toolbar to turn on/off the grid and/or the numbering at will, for example.

I was trying today to get a module to have grid numbering user adjustable in game by a GP. Couldn’t figure a way to do it so thought I’d check the forums and found your post. Great idea!

I second this request.

There might be a way to add a java class that would do this but I’m not a programmer. 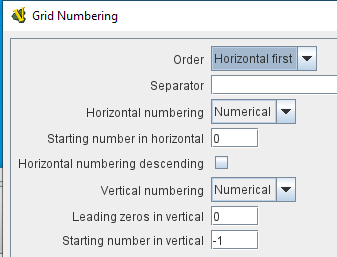 For starters, allow a variable to be entered in the “Starting number…” entries. This variable would be defined by a GKC (preferably) or a GP.

Many, many thanks to the VASSAL guru’s that keep VASSAL not only up and running but getting better and better!