PLEASE SEE LAST UPDATE BELOW and Seperate other bug post - I STILL NEED HELP ON THIS ONE PLEASE!

I have nested Turn Lists to drive Sequence of Play.
I have a root list that has two items in its list , AXIS followed by ALLIED.
Below that i have multiple Turn Lists for each game phase.
For example, one for Air Phase, one for Land Movement, one for Combat, etc.
For example in Land Movement I have items “Put units in Reserve”, “Naval Disembarqment”, “Rail Movement”, “Administrative Movement”, “Normal Movements (with Overruns)”
Lets call these say items 1 through 5.
When I step forwards it will maybe show items 1 and 2 then jump directly to the next list. Going backwards it might show item 5, then 2 then 1.
Its not just the “Movement” list that does this, others randomly vault around.
Am i missing how this works? Should i not use it this way? Is this some weird randomise “feature” I have to switch off somewhere?

It also for some reason sometimes decides to show with the window 10 lines high, rather than 1!

Im on Vassal 3.5.8 on a Mac running 32bit.
Would like to get past this rather than have a typed up Chart with the Sequence on it, which is so old school. 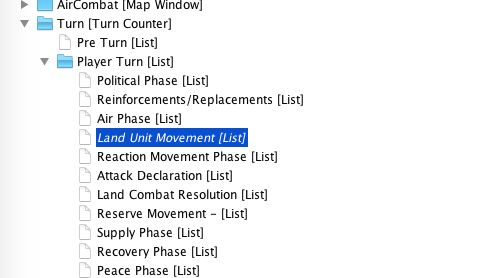 Land Movement List setup (all the other lists pretty similar) 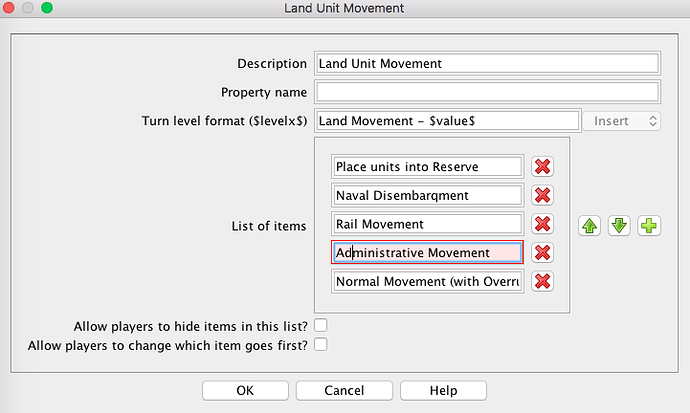 Heres a screen shot of the log of it just skipping some items in the Movement list (the last few it just has jumped over and moved on to the next list!).

UPDATE: After doing a Refresh Counters on the Scenarios I currently have, the Turn counter now appears to be working. It “seems” to be stepping through all items in all lists a. No idea why this would change things, maybe you know. Fingers crossed it continues to work. I am however still seeing “Monster” turn screens appear for some items.

UPDATE: I think “Monster” screen occurs if you click on the “+” bottom quickly and it registers as a double click, and then seems to maximise. This may explain some of those multi line turn screens appearing. You might want to switch that event off or map it back to a single click???

UPDATE: Its all hosed again. Both Sequence tracker and Turn Tracker on an updated existing scenario just show random rubbish now. Jump all over the place. This is extremely frustrating. There is NO WAY i am going to rebuild a 300+ piece scenario from scratch just to get this turn tracker working. Its amazing that this does not work on old scenarios when you change or add a Turn Tracker. Can someone help please, otherwise Im going to rip the trackers out and go back to just a text list in a chart and good old turn counters on the map… pretty sad.

It’s difficult to help with problems like this if we can’t see the module.

Module is VERY LARGE, sorry. Maybe i can create a very small example module but that would take quite a bit.

It currently appears that if you have an existing scenario thats saved away (or a saved game), and you add a mutli-level Turn Counter lists to the module, when you try to use the old scenario or an old save, those turn counters lists go absolutely nutz. They literally skip half the list items and go to the next list for example.

If you have exactly the same module with the new Turn counter lists, and build a new scenario or save with say “Free Form Setup” (i.e. pick a map, drag out some pieces etc ,etc) the lists all work fine and increment forward correctly.

Smells like something in the Turn List structures not initialising correctly when its rehydrating back from the old pre-lists save file (for the scenario or save game). When you build a new game, it initialises up fine.
Just my guess, happy to answer questions.

If you have exactly the same module with the new Turn counter lists, and build a new scenario or save with say “Free Form Setup” (i.e. pick a map, drag out some pieces etc ,etc) the lists all work fine and increment forward correctly.

This is pretty suggestive that it’s a feature the Counter Refresher can’t touch (because it’s for pieces), and that the solution is to build new scenario files. For a lot of reasons, saving scenario construction for the very end of your project is highly recommended.

If you have to share a large file, cloud storage like Dropbox/Google Drive/etc is a good way to do it.