We now get warning messages about Vassal mis-matches, which I know is to help. However, Vassal mis-matches are very common and always have been. I try to keep up-to-date myself, but I am seeing so many players (mostly the Combat Commander players) freaking about the messages.

I know a warning is nice. I know errors could occur for much older vassal with the new ones, but I am wondering if these messages are causing more stress than good. I have had people not want to join games due to the message, and the gameplay has been fine once coaxed in.

From my perspective, having the messages is a big help.
Having different versions can mean subtle bugs or broken games and this lets everyone know up front of a potential problem.

Before this, you had to go thru extra steps to check versions (right click on player names), which I suspect most people either never knew about or never bothered to do.

Just like having an out-of-date browser can open you up to security problems, having an old Vassal means you are not taking advantage of the many bug fixes.

I would much rather have the warning (that people have the option to ignore) rather than having background mismatches that drive errors and broken games.

I know errors could occur for much older vassal with the new ones, but I am wondering if these messages are causing more stress than good.

Are they causing people to update? If not, why not?

There are some people that have had to be convinced that the chances of “bad” stuff happening is unlikely, but I don’t know if its stopping anyone, but I have gotten a few messages from people before games about it, and a couple from folks where I joined their game to watch and my Vassal was newer than theirs concerned I’d break their game.

I have yet to see an issue of any ill-effect, but it has folks worried. Vassal mis-matches have always been a thing. People tend not to update unless forced or heavily prompted.

Yeah. I understand. I keep up-to-date, but so many don’t even when seeing the message every time they play.

That was a great reply originally.

This. I’ve had so many false bug reports because of version mismatches. In it’s short release time, this feature has already saved me twice from the incredibly frustrating and futile exercise of trying to find a bug that doesn’t actually exist…

Every player tonight had a module mismatch. Thing is I’m the developer. Every one had the same crc version, I had something else. BUT, the module being used is EXACTLY the same. The different crc’s are entirely due to me using the module version I posted to google drive and that I have been using the current module version to process later versions. I did not change, in any way, the currently released version. I did, however, selected save the module post undertaking changes in the new version. This save was in response to the Vassal pop-up, do you wish to save the module. I selected yep. Thus was a new crc made, even though there were absolutely no changes to the module.
I use a current module version to develop fixes, enhancements, etc. I have 3 modules doing the same stuff, albeit with different maps sets. If I open a game piece to use that as a template for another module (copy/paste text etc), Vassal ‘assumes’ I have changed to source, thus leading to the prompt to save the module.
OK. Love you guys and the work you do to support all of us to play games using Vassal. But is it really necessary to go to crc level version checking?

Is there a way to have VASSAL alert the user that there is an update perhaps? Instead of looking themselves? No program should force an update, but it could be more obvious that there is one. 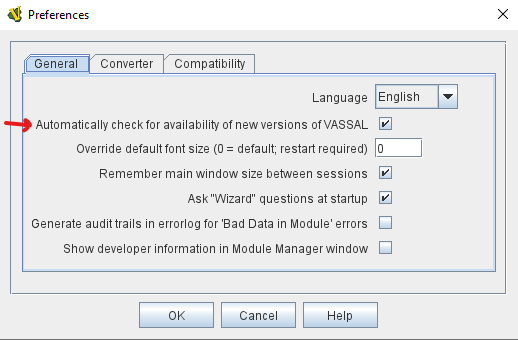 Duh, I knew that too. Maybe add text saying “we strongly suggest you update?” It is a slippery slope, but it is clear you all want people up-to-date.

If I open a game piece to use that as a template for another module (copy/paste text etc), Vassal ‘assumes’ I have changed to source, thus leading to the prompt to save the module.

Why would you answer “Yes” at this prompt?

Yes—Vassal has checked periodically for updates since 3.1.0, released in February 2009.

So either you made an inadvertent change or Vassal is changing something when you open and immediately resave… Possible bug?

But is it really necessary to go to crc level version checking?

I am pretty amazed that a corrupted download could even be recognized as a valid module!

A truncated download likely could not be loaded as a module, given that the central directory for a ZIP archive is at the end. A corrupted one could be loaded if the corruption were in the middle and didn’t hit any vital files (such as the buildFile.xml). Corrupted downloads ought to be rare, though.

It’s also worth noting that individual ZIP entries have their own CRC32s, so you couldn’t realistically run a corrupt module without getting an error at some point, and if it didn’t occur immediately then it would have to be an error you’d get on loading an image—that would be fixable simply by downloading the module again.

That is to say: Corrupted modules are unlikely to cause you the kind of trouble that the load-time checksum is intended to prevent.

That is to say: Corrupted modules are unlikely to cause you the kind of trouble that the load-time checksum is intended to prevent.

Interesting. My friends and I played a lot of Terraforming Mars with VASSAL while the pandemic had us locked down (if only we could be sure that was over and done with!), and we were updating the module frequently. I recall 3 occasions where one player ended up with a different checksum than the others even though we were all supposedly on the same version; in fact, everyone had just downloaded the module from Google Drive! Not sure how that could have happened besides a corrupt download…