3.6.6 GPIW still acting funky: after move from face up deck to face down deck, still face up in GPIW

I hadn’t noticed when the last fix for GPIW came out, but now GPIW can under some conditions display masked pieces in a deck unmasked. 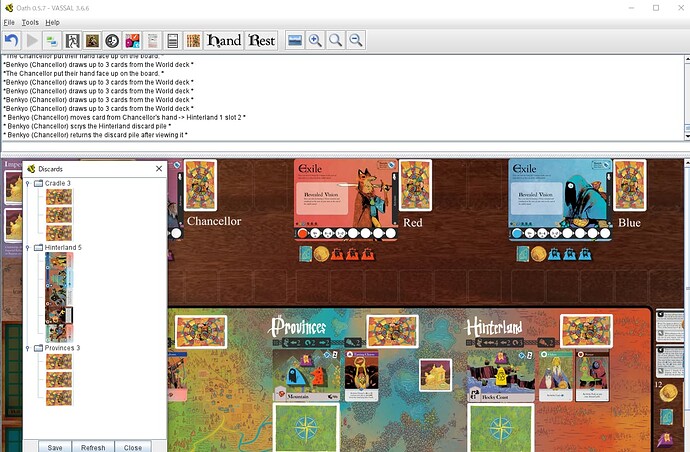 The GPIW can be seen here showing the “hinterland” deck face-up, despite them being face-down on the map (the deck to the right of the white text “Hinterland”).

Module GPIW and relevant actions unchanged from when it worked, before the GPIW changes.

Funky. I can’t make that work with 3.6.0 either. Also to my knowledge we didn’t make any changes to Inventory w/r/t “mask” behavior (fronts & backs of cards). On the other hand the behavior of cards in face down decks has always been pretty dubious (they aren’t really masked the way they are if they’re flipped face down on the table by an owner/player – it’s a bit of fakery that might be faking out the Inventory’s perennial lack of security).

Do you have a way to check an earlier version of the module if this was the same with e.g. 3.5.8? (Because I wouldn’t be shocked if this was actually “always” broken?) The approach for finding/fixing a bug that “was always broken” is quite different from one “that broke recently at a specific roughly-identifiable point in time” is very different for us, so anything you can provide on that front would be most helpful.

Vassal 3.5.5 is the oldest version that has a corresponding module in which I implemented this function of moving between face up and face down decks, and it also has this problem.

Okay - will proceed as a “has probably been broken forever”

I think it eliminates the problem. Uses same strategy we have previously used elsewhere to force facedown decks to submit to our will.