Ever since moving to 3.6.8 I’ve noticed graphic refresh lags a bit behind. I step through a log, pieces move, the red outline persists for a bit as new ones show up for continued movement. I rotate a piece, and I can see both rotations for a bit, and so on. 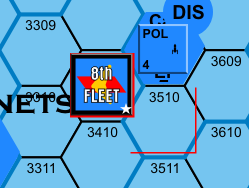 Here you can see some of the red outline has been left behind in the previous hex as the fleet marker moves. It goes away on its own, but can take up a couple seconds to do so.

I can’t replicate the problem. What are the minimal steps I need to take to see it?

Load any log in any module, step through the log (to get the red ‘just moved’ outlining).

The after-image can take a few seconds to go away if you’re stepping through slowly. It seems like it goes away faster if you’re going faster, but at a moderate speed I’ve seen 2+ afterimages.

You can also see it on almost anything, I noted odd outlines and such while rotating counters in VASL.

Also, I’m noting bad graphical behavior on counters I added to the F&E module after going to 3.6.8. Everything already there is fine, but everything I’ve added recently has trouble in the stack viewer. 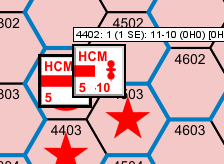 Here you can see a piece that I just flipped while hovering over it. All older pieces will display the flipped image correctly, but ones I just added over the last week or so will do this thing where the hoverover shows parts of each image. The text on the stack viewer is also not updating correctly, but that may be on me as I’m trying a new method of updating the stats. (At that point there should be a “5-5” in there instead of the “11-10”.)

I stepped through a log on Linux and saw nothing unusual.

I can confirm on Windows 64-bit larger games
that had fine performance in 3.6.7, are completely unusable in 3.6.8. Not just stepping through logs, but as reported in another thread, map scrolling can take SECONDS to move from one screen paint to the next.

@twenck Would you give some specific examples? I can’t troubleshoot modules if I don’t know which to look at.

Concentrating on the stack viewer problem I reported yesterday (which I think is related) for a bit:

I’m having trouble reproducing the exact problem reported. Checking back with my current working module, it behaves exactly as described; only very recently added counters have the problem. But, if I go back to say, 3.5.8 (older than some of my good counters), create a test module with one counter, and then add a new counter to the module using 3.6.8, both counters show the trouble. I just don’t know how some counters don’t have this trouble in 3.6.8.

Here’s a two-counter test module. Pull out a counter, select it, flip while hovering over. On Win7 at least, the hoverover does not update correctly.
http://www.rindis.com/Test-368.vmod

In addition, there’s a bunch of modules that don’t seem to have this trouble. VASL is fine on this. Pragamatic War, etc, all seem fine. I was thinking it was just in some recently done bits and drabs I have, but I have found it in a few modules, such as BCS-Brazen Chariots (created in 3.5.0) (Barbarossa: Army Group Center and North (3.2.17), and Pursuit of Glory (3.2.15).

In all cases, open up a game, select a counter, hover over it, hit whatever control will change layers (usually control-F), image does not change in the hoverover. (Or, see next paragraph.)

As I showed in the shot yesterday, part of the counter image changes, and part doesn’t. The part that does change is the part over where the counter actually is. (Sometimes it seems to line up exactly like that, other times, the refreshed part seems to offset to the right a bit as you can see in yesterday’s image.) Note this means that counters at the top of a stack almost never do a partial refresh, since their image in the hoverover is generally far from the actual stack; so to see a partial refresh, use a single counter stack.

I had trouble with Great War Commander, and then it stopped. What I did in between was changing zoom levels. In combination with my problems with the F&E module, I’m thinking this comes down to a tiling issue. Where I have modules that I’ve used a lot, and the counter images are already tiled properly, the refresh works (this would explain VASL, I use that a lot, and Pragmatic War I played recently). For things just getting tiled (like new counters added to my module), something is going wrong, causing the bad refresh.

(If I’m right, then this probably isn’t the same issue as the lag on outline refresh and such.)

Oh, and one more thing with 3.5.8 (definitely not graphics). I have had it die twice today while opening a file dialog. This is an old occasional problem with Vassal that got quashed a while back, and I haven’t seen until today. Given the performance issues from the other thread (which I don’t seem to be having, certainly not to the extent described), I’m wondering if that is caused by Vassal not getting a response from the system and crashing. (Shouldn’t be a timeout, you just get a glimpse of the window coming up, and then Vassal is gone.)

My module is proprietary and not available to the public, but I can send it to you as required. However, the build VASSAL-3.6.9-6324839-aoe_bb_fix you suggested for the Greatest Day module fixed the issue in my module as well.

In addition, in case the info helps, I noticed in 3.6.8, that simply moving the mouse over the map the slightest bit, even where no pieces are present, immediately pegged the Vassal/Java process to 25% CPU (one core - the max for Vassal on Java) and stayed at 25% CPU for several seconds.

@twenck In that case, I don’t need it, as I’ve already fixed the problem. Thanks for testing the build.

For those of you still having probelms: Please try the VASSAL-3.6.9-e2d1c07-revert-11521 build from the builds archive. Does that solve the problems you’re seeing?

Initial testing shows that the refresh problems are solved (both stack viewer and the outliner). That leaves the file system crash (which is so random I won’t know for a while, but I’m going to hope it’s gone), and a problem that is definitely my fault. I’m going to rewrite a prototype.

Looks good to me, as detailed in the discord channel.

3.6.9 is released. If you have further problems, please let us know.