Can't start Combat Commander modules, any of them

Hi everyone. I’ve had a problem come up today when trying to run Combat Commander, 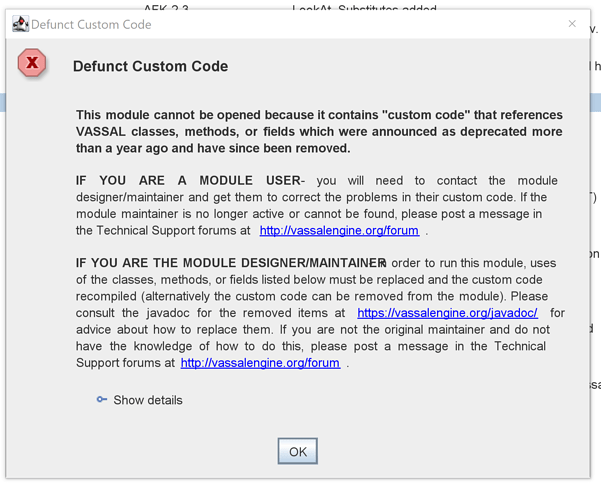 This has been in the works for many, many months now to try and encourage module designers to come up with a plan for their (often very aged) custom code methods.

If you are in a pinch for today, just downgrade to the current stable release of VASSAL (or install it side-by-side).

Also double check that you are using the latest version of the module. I am pretty sure CC has already been updated to be 3.6 ready.

t version of the module. I am pretty sure CC has already been updated to be 3.6 ready.

I have not updated the module. I have always stated I am waiting for V4. Last stable edition was 3.2.6
It does work with later Vassal editions but I have not verified to what point

I checked all the modules in the archive to see which would be affected by removing deprecated code in 3.6; it wasn’t a very long list and almost no modules in it were their current versions. I thought that the CC modules were not in that list, so this is a surprise to me.

The custom code report for CC:E says this:

Those wouldn’t be very hard to adjust for; it’s a matter of getting the images via ImageOps instead of the DataArchive. I’d be happy to advise with that if I could see the source code.

As for what else would need to be adjusted to be current, that report doesn’t and can’t tell you. It’s possible that nothing else would need adjusting. Do we know if CC:E works in 3.5.8?

I’ve been working on a module data converter for several weeks now, and that’s necessary for V4. I’d like to be able to continue on with that; the only reason I can is that I’ve been able to mostly disengage from work on 3.6.

I expect that dealing with complaints about the CC modules being broken with 3.6 will delay V4 more than fixing the modules will. I would prefer not to have to undertake that work myself and avoid the delay entirely, but I will do it if I must. Even if V4 were ready now, 3.5.8 (and soon 3.6.0) would still be the current V3 release in use. V3 has a fair bit of life left in it yet.

We don’t have plans for anything beyond 3.6 in the V3 series, so getting things current for 3.6 may be the last time that job needs doing.

There are now CC:E and CC:P modules updated to work with Vassal 3.6 if you check the module pages.