Cleaning up the Tile Cache

The tile cache needs cleaning up.

The ‘Clear Tile Cache’ takes a very long time to do that. Way faster just using windows explorer. Why so long?

How can you tell that Windows Explorer is faster? What shows you that it’s finished? How long does it take to empty the Recycle Bin after you’ve deleted the tile cache in Windows Explorer?

The clear tile cache also needs to do a permanent delete.

Would you elaborate on that? I don’t know what you mean.

When a user removes/deletes a module from their vassal usage, that tile cache should also be deleted (as per 1 and 2 above).

We used to do this. It causes TileNotFound exceptions when there are multiple copies of the same module in the Module Manager and one of those is open.

As a Vassal module developer my hard drive becomes quickly cluttered with tile caches. Not a problem with hard drives these days you say. True, to an extent. I dislike having lots of the hard drive tied up with obsolete module versions tile cache’s.

You can always clear the tile cache if you’re finding it’s too large. 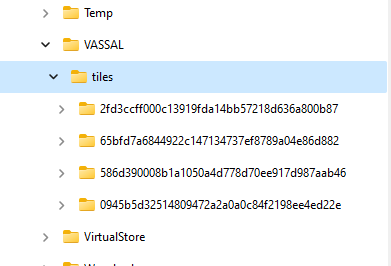 Windows explorer takes several minutes to delete the files in the cache. The clear tile cache time is several orders of magnitude more.

Wait, you’re saying it takes more than an hour to run Clear Tile Cache?! Can you give me some actual times so we know concretely what we’re talking about?

When deleting files via explorer those files are ‘sent’ to the recycle bin. If one presses and holds the shift key then pressing the delete key, the deleted files are permanently erased and normally not recoverable (except via some apps that one can use).

I agree, that’s how the Recycle Bin operates on Windows. This is why “deleting” files in Explorer is fast—“deletion” is not really deleting anything, but is instead just a move. Moving a directory (to a new location on the same filesystem) is fast because all that happens is that it has a new parent set on it. Actual deletion is much slower because you can’t delete a nonempty directory—to delete a directory you have to do a depth-first walk of its tree, deleting leaves, until you’ve worked your way back to the original directory and it’s empty.

do the folder names have to be so not understandable? Why not use the module’s file name?

Yes, they do, because file contents have no necessary connection with filenames.

The tile cache directories are named for the SHA1 hash of some data from inside the module, and thus suffer from neither of these problems.

That clearing the tile cache takes more than a minute or so suggests that something is quite wrong. I’d like to hear from anyone else on Windows how long it takes for them (and what size the tile cache is that they’re clearing, as the time elapsed will be proportional to the tile cache size).

Here’s the complete code in Vassal for clearing the tile cache:

Yes, it really is just that one line. FileUtils is from Apache commons-io, so 100% of the code being executed isn’t ours.

I’m willing to try an alternative, but I have no means of testing it myself.

I don’t follow what #2 is about. You seem to think this has some relevance to the problem at hand, but it’s eluding me. Would you try explaining?

Paladon, I have no patience left. Keep it respectful or you will be suspended. Official Warning.

You might make a copy of your tile cache before trying this so you can compare the time 3.6.10 takes to clear the same cache.

You are kidding me. There was absolutely no disrespect. Do not take umbrage so easily and without cause.
Joel continued the discussion quite amicably and even got a snapshot up to try. That is good.
For info, the 4 tile caches depicted take 4.42GB with 171,099 files. Windows explorer takes 1min 54sec to permanently delete them.
Explorer takes around 10 minutes to copy the directory to somewhere else so I could experiment.
I’ll do a current vassal official release (3.6.10) delete and the snapshot for comparison.

You are kidding me. There was absolutely no disrespect. Do not take umbrage so easily and without cause.
Joel continued the discussion quite amicably

I think Brent is serious. Calling their approach “asinine” isn’t how I’d go about convincing volunteers to spend their time fixing my problem.

The long-time maintainer of a port of Firefox to the PowerPC architecture wrote a post-mortem of the project when it ended in 2021 containing a section on bug reports which I’d encourage anyone to read. (Search for “Now for the mildly controversial part” in the text; from there to the end is the relevant portion.)

That said, I’m interested to hear what results you get from clearing the same cache with 3.6.10 and the test build, and I have two questions:

Permanent delete means the FAT (or modern equivalent) for those files are removed. A normal delete, that ‘moves’ the files to the recycle bin, changes the FAT to indicate that the files now reside in that bin. The permanently deleted files are still there until overwritten by new files, etc. As such the permanently deleted files can still be restored by using data recovery software, unless they have been overwritten that is.
I hope that explains the situation.

Vassal 3.6.9 and 3.6.10 take just over 8 mins (okay, I was wrong about the ‘order of magnitude’ as it is actually just over 4 times slower. Just seemed a long while just waiting).
You sure have hit a sweet spot with the snapshot version though Joel - 53 secs. Windoze is a laggard compared to that impressive figure. Well done (applauds).

Therefore, before slam dunking someone, examine the actual context of the message. I did NOT impugn any person, I impugned a directory naming system/protocol, one that has maybe existed for a long time (or maybe not, but who am I to know).
Use some logic here.

You sure have hit a sweet spot with the snapshot version though Joel - 53 secs.

In all probability that directory naming system stems from a while ago.

I still maintain, that the directory naming system needs to be way more vassal user friendly.

The tile cache isn’t intended to be a user-serviceable part. If you’re poking around in it, you’re assuming responsibility for understanding how it works yourself. I don’t want to encourage anyone to tinker with it.

There won’t be a tile cache in V4, so this will all be moot.

Understand the not encouraging part there.

Here in lies a difference. Your way, with indecipherable folder names for us mere peasants, and something that actually means something to us peasants. How about a compromise? Tile cache directory names can be either based on the actual module’s file name or what the developers prefer to see. All this is based on the differences between what I (and maybe other non vassal software programmers would like to see in their directory naming structure) and what you, the vassal programmers, would like to see. A part of user/developer only preferences. Thoughts?

There are two constraints I insist on:

We will receive endless reports of problems if one or both of those constraints are violated.

If you have a proposal which respects these two constraints and someone implements it, I’d be happy to review a PR for that.

Alternatively, if what you want is a way to clear the tile cache for a single module from the Module Manger, there’d need to be a way to check that no Player or Editor is currently using that tile cache. Again, were someone to submit a PR, I’d be happy to review it.

So what does Windoze do when I copy paste a vassal module in the same directory? Say the module’s name is ‘game’. The pasted new module will be called ‘game (2)’. Relevance? Same folder, same contents, different name. Vassal will take as a new module and treat it as a new module and perform the tiling for that ‘new’ module.

I can’t replicate that. Copies of already-tiled modules do not tile for me.

Moving a module to another directory will muck up Vassal, as it expects that module to be where it was.

This is exactly what I’d expect to happen if you move a module while the Module Manager is open.

Renaming a module, via explorer or similar, results in the same error message.