There’s a usability issue with the Editor windows that’s been there forever but maybe could be fixed already in v3.6. Possibly it’s just Mac. Anyway…

Say you have a window position like this, you’re editing a trait and about to press the “OK” button… 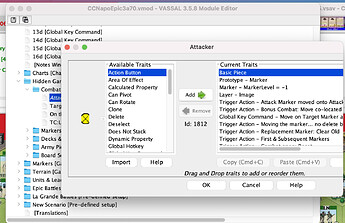 Sometimes, it doesn’t happen like this and the main editor window remains in the foreground.

I think that one issue at least is that the Editor is not updating its state-memory when the trait window is closed; hence, it is restoring the trait window when the Edit-Properties command is selected, until another trait is editted.

Once I start editing modules under v3.6 in earnest, I will re-visit this this and advise if it is fixed or not.

This doesn’t seem familiar to me, so maybe Mac only.