Invoking Vengine.jar from another program

If you’re not already aware, I’ve written a program to create HTML labels for VASL scenarios, that’s lets you create things like this: 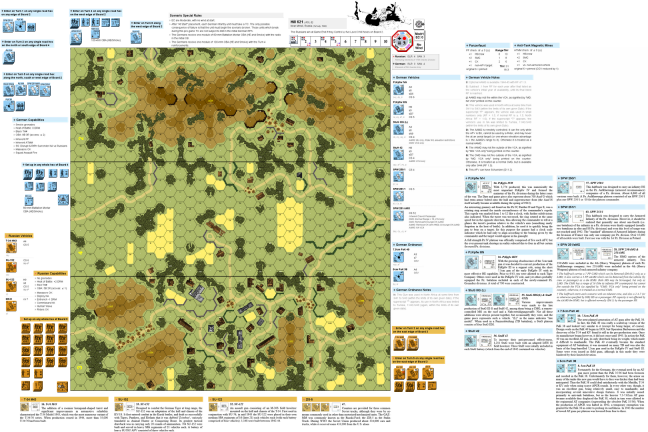 Discussion at Game Squad is here.

I’ve recently added a feature that takes the scenario details the user entered into my program, and invokes Vengine.jar to automatically create labels in a .vsav file (or update them if they’re already there).

A couple of things came up during the development of this…

(*) While calling GameModule.getGameModule().getGameState().decodeSavedGame() loads a .vsav file sufficiently for me to look at what’s in it (by traversing the Command tree), to be able to make changes to it, I need to execute the Command returned. However, this causes the UI to sometimes come up. I never see it in the Fedora VM I use for development, but it always comes up on Windows, so I imagine there’s a race condition between the UI starting up and my making changes to the game state and saving it out. The UI actually crashes, presumably because I haven’t initialized something, but as long as I manage to successfully make my changes and save them, I consider things to have worked.

So… is there any way to load a saved game, in such a way that I can make changes to it, without the UI coming up?

(*) To save a game, I would like to call GameState.saveGame(), but it calls getRestoreCommand(), which does nothing unless the saveGame action has been enabled

There doesn’t seem to be any way for me to get access to this object, due to Java access protections, so I had to reimplement the whole of getRestoreCommand(), and every other function it calls, with this check disabled.

(*) While things seem to work, I’m a little concerned that the .vsav file I’m writing out is borked in some way because I haven’t done things properly. It would be very mch appreciated if someone could comment on my approach…

(-) Instantiate a ModuleManagerMenuManager (it seems to be needed to load VASL).

(-) Configure where the boards are:

(-) Look for existing labels by checking the Command and its children (via getSubCommands()), that meet the following requirements:
- must be an instance of AddPiece
- whose target is an instance of DynamicProperty
It’s state field is split into its component fields, using “\+\t” as a separator, and we take fields #3 and #4 as the label fields.

(-) To add new labels, I iterate over all the PieceSlot’s using:

I create a GamePiece, by calling PieceSlot.getPiece(), then expand the piece:

gamePiece = PieceCloner.getInstance().clonePiece( gamePiece ) ; I get the GamePiece’s state by calling getState(), replace the default values with the content I want to appear in the label, and then insert it into the GamePiece by calling setState().

(-) To update an existing label, I do something similar to the above, but using the label’s existing GamePiece object.

Is this approach valid? Is it going to cause problems for peoples’ scenarios down the road…?