Need more screen space for your Vassal games? Spacedesk.net is free software that lets any tablet on your network add extra screen space to your computer without wires or permanent connections. You can easily drag and size any Vassal window over to the added “monitors”.

I’ve had three tablets talking to my desktop over wifi. This photo shows an iPad with two Vassal windows open on the tablet, and the main game window on the bigger monitor. 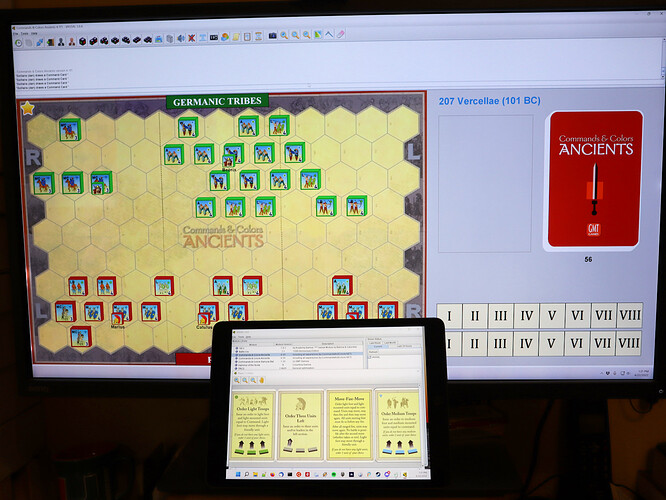 That looks quite spiffy!

I sometimes get together with my gaming buddies for Garage Games Day and I have a big screen in the garage that we use on occasion. Of course, this becomes an issue when private hands are involved.

Would this work if each player has their own laptop for their private player hands and then just use the big screen for maps and such?

The added tablets and laptops are treated as a continuation of the main screen. When the game windows first come up, you need to drag the windows to the left or right depending on which tablet/laptop you want them to go to.

The windows might be visible on the big screen to all before you drag it to the laptop. But after you drag it, it will remain visible only to the people that can see the laptop.

In Vassal games it might be a problem depending on the module. In Commands and Colors Ancients, the main board is public knowledge. That would be OK on the big screen.

However Vassal CCA only lets the logged in player see certain information such as card hand. Individual hands are not visible to all players. So you might have a problem that player 1 hand is visible on laptop 1, but player 2 hand is not visible on laptop 2 because CCA only lets one player control the local game windows. So it depends on the information visibility in the game.