When I have multiple “Place Marker” traits (triggered by the same key/menu command), it correctly adds the pieces to the game but does not offset the display of the counters in the stack. Moving the stack and dropping them elsewhere causes them to correctly fan out. 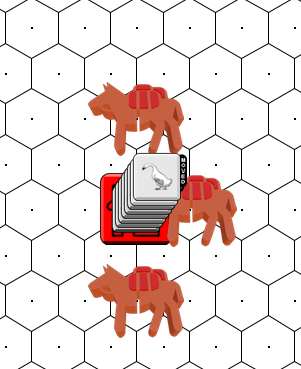 To Reproduce:
Open the saved Game file, ALT-SHIFT Click on the Red Home tile and from the right-click menu choose “Initial Pieces”.

Thank you that was a significant bug, as stacking pieces need to always get placed into stacks “or else bad things can happen”.

The bug only manifested if the piece doing the placing was non-stacking but was placing a stacking piece (as was obviously the case in your example).