Twilight in the East has some great custom java script created by a now-deceased module designer. In the latest version of Vassal, we are receiving error messages indicating following: 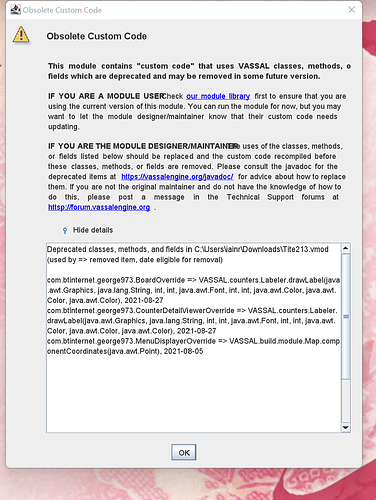 I have received the java files from one of the maintainers of the module but need to have the specific files updated to ensure the module works correctly. Can someone help?

I’ve already done all the work to update the TITE code. It’s here.

Great thanks Joel, are you publishing updated modules or is that up to someone else?

I would like to incorporate the conceale/masked unit traits in another module I am creating but not a java expert at all and unsure what I need to import. (The feature whereby units are masked at certain hex distances from an enemy unit and totally invisible beyond another range - ideal for a WW1 operational naval game)

Is there some simple advice on how to do this or is it more complicated?

Looking back at this has jogged my memory. What I did was update all the parts which were trivial to update. There are some components in the TitE code which simply cannot work correctly with Vassal 3.6 without major modifications, and I’ve not touched those. (The classes which extend Map are a problem, iirc. Most other things are ok or not far off.)

If you’re going to go this route, you’ll need somebody who is able to delve into the code to sort out what’s usable and what’s not. I’m not volunteering for that—I’m trying not to spend time on V3 at this point, as that takes time from working on V4.