V3.6beta7 bug: Movement Trails - sometimes hidden to a player when should be visible

On replaying the log file, the player who was unable to see trails under v3.6beta7 could see the trails providing they use v3.5.8 to replay the log.

View of bottom right corner of screen, under the two versions of Vassal. To reproduce, play the log through to a couple of actions past the third die roll. Select the unit that moves, in order to see the movement trail (or absence of it) more clearly. 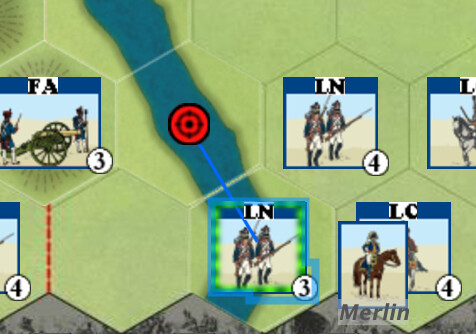 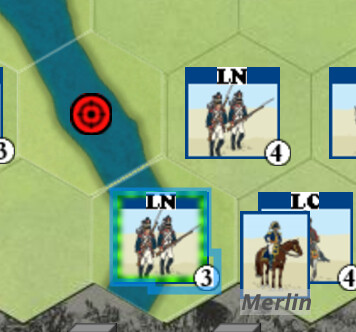 The movement trail trait for the example piece. I am fairly sure that no special action was taken in the game that would have turned the trail off for either player. 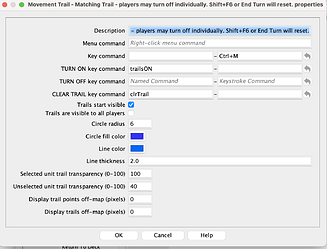 One clarification – your first paragraph mentions movement trails “that should have been visible to both players” but the configuration box you show has the “Trails are visible to all players” box unchecked. Just making sure we’re talking about the same thing before I have a look.

As i understand it, “visible to all players” being unchecked just means that the trail can be turned on or off independently by each player.

As “starts visible” is checked, I understand thaf means the trail will be visible to all players initially.

Okay that might be the first time I’ve ever understood what the “Visible to all players” checkbox is actually supposed to do. I’ve updated the docs a bit so that Others Who Come After might understand too.

Meanwhile, when a build comes up for MovementTrailsFixAgain (or some name like that), could you give it a try and see if that improves things? Your hint about things that haven’t moved yet not displaying things gave me an idea/clue.

Meanwhile, when a build comes up for MovementTrailsFixAgain (or some name like that), could you give it a try and see if that improves things? Your hint about things that haven’t moved yet not displaying things gave me an idea/clue.

That seems to have fixed the issue. Pieces moved show trails again. The demo problem “move” in the log file still doesn’t show a trail despite that the move trail shows under Vassal 3.5.8 but is that just a hang-over from the problem and the way v3.6 is now handling trails ? i.e. won’t happen with games started under the patched version.

Probably? If the one in the log had already had its game state “damaged” by the time you started logging then that would certainly mean it wouldn’t get any better, because the fix I applied is only for the very first time a piece has (ever) moved.