Just for kicks. Viewing area is obviously cramped but using the touch screen to move counters is verrry nice. 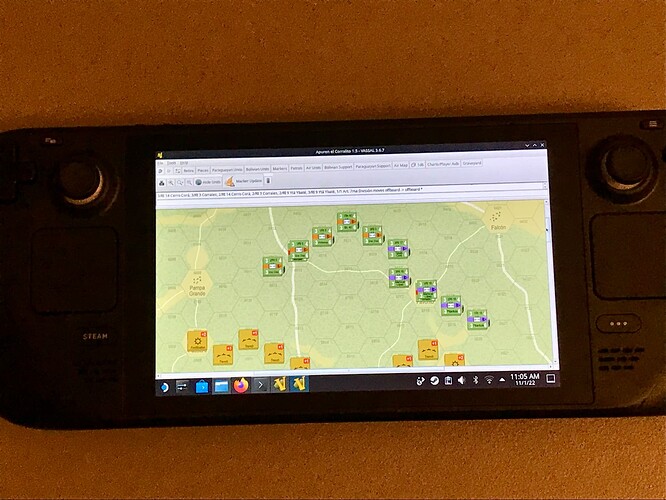 I’ve only dinked around with it a bit so far. I had trouble expanding stacks using the touchpad so have been using “mouse” commands(mapped to right trackpad) for that, but moving counters using the touchscreen works really well so far.

Played several turns using the module for “Corpo Truppe Volontarie” this morning. Confirming what I said before, stack expand/collapse is inconsistent using the touchscreen, but drag/drop and multi-select work great and are really intuitive. I am relying a lot on mouse commands that are mapped to the dual trackpads on the Steam Deck, but they work fine for my taste. Upping default font size to twenty helped in various ways, including making it easier to select individual units out of a piece palette using the touchscreen instead of a mouse/trackpad click.

Next, I’m going to check and see if I can re-map some of the controls. Would be pretty nice to roll a die with a trigger press, that kind of thing.

Please, could you post how you get to run vassal in steam deck?
You have to install Java?

I’m running the Linux version of VASSAL(Steam Deck is basically a handheld PC that runs Arch Linux), so yes, you have to install Java because it isn’t bundled with that version of VASSAL. The steps are pretty simple:

The Missing Package Manager for macOS (or Linux) — Homebrew