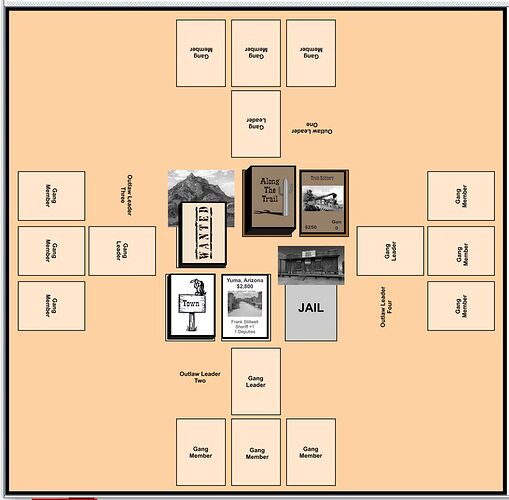 I am attempting to create a Vassal Module for my new card game about the old west. The photo shows how far I have gotten.

I have a couple of design questions. The photo shows how the game would be laid out on a table.

Each player starts with 4 outlaws in their “hand” they place them on the table with one outlaw, the Leader, in front of the other 3 members of the current gang. All these cards are visible to all players.

My question is should I attempt to keep this format, or have each Players “Hand” in a separate window with the Outlaw cards lined up?

The 1st on the left would be the “Leader”, the next three would be visible to all and any subsequent cards would be in a pile face down so only the owning player could see them.

A 2nd question would be how to get the “Outlaw” cards to be facedown when placed in the jail space. Right now they remain face up.

As a bit of background…
I am currently watching, on YouTube, both John Dinger’s design series as well as Joel Toppen’s series.
But both are geared toward games with tokens and proper maps. Neither are really card games.

Any suggestion for you pros would be appreciated.

The game is up on Board Game Geek: Hole In The Wall | Board Game | BoardGameGeek

Thanking you in advance

If all the information should be visible to all players all the time, there isn’t much benefit in shunting the hands off to separate windows.

One question is whether the orientation or relative position of these hands matters. If not, orienting them all to face the viewer and make better use of space might be an option.

Easiest way to get cards to flip facedown is to make the jail a deck, and have it set so cards in it are always face down.

But even if you do that, you might need to auto-rotate the cards going in back to their default facing.

Both actions can be achieved by a map-level key command to any pieces ending a move on the map (check map properties) and triggers on the cards. Your trigger should check where the card moved to, and if its a zone called the jail, and the card is face up, “flip” the card (check mask properties). Similar thing for changing facing.

I have a card-based module that does some similar stuff: 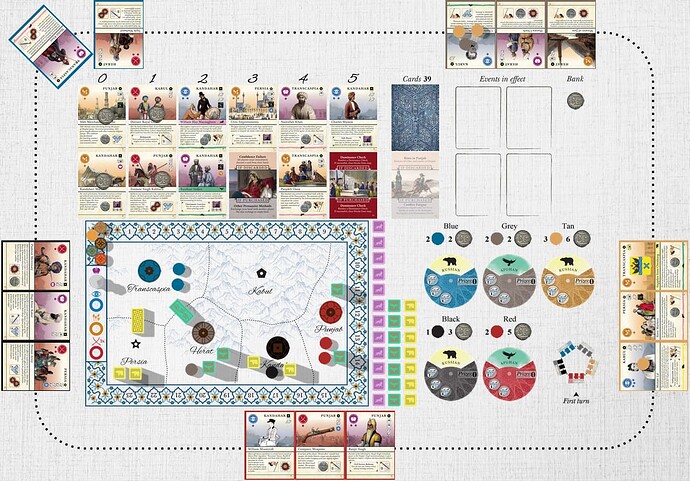 You can see there’s a central “market”, and an outer ring where players can play their cards. This example is of a 5-player game. Little more complex than your example, because of the variable player count and the need to have a continuous circle for players to play cards to. In this case, relative positions do matter, so I went for the upside-down and sideways orientations. Player hands are also on separate windows, because they are not public information.

But if you dig into it, you’ll see the automatic card rotation and flipping going on, maybe that could be of help.

My game can be player by 2-6 players. I wanted to get the game up as soon as I could. I plan on doing a 6 player Variant once this one is completed.

Your idea of moving the player hands and re-arranging the board has merit. I will work on that in the morning.

Did some adjusting, how is this for a better playing surface?

Would like to have the player name listed under “Outlaw Leader”
Also the total money the player has under the money bag.

Might be OK, but a variable player count is one case where separate windows for players might be better. A 2-player game would have so much dead space.

I see what you mean Ben.

This is my 1st game design also my first venture into the wonderful world of Vassal.

So much to digest.

I have to wrap my mind around Vassal Play vs “Round The Table” play.

Have to look how that is accomplished.

I have reworked the “Playing Surface” and the “Player Hands”. 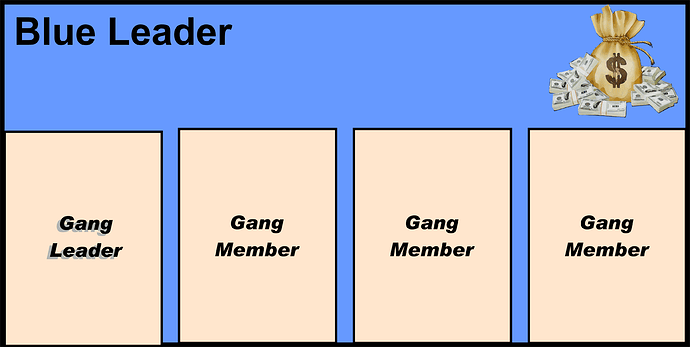 From the “It seems you always forget something” file.
I forgot to add the last card pile to the playing surface:

Now that surface is complete.

Next to work on the “Dice” icons, I think 6 sets of different colors, because 2 players are rolling dice at once, so color coding them to the player colors makes sense to me.

Slowly getting there.
As I said, this is my 1st attempt at module creation. Any advice would be appreciated.