I’m trying to automate upkeep in Cthulhu Wars, where one of the ways to gain power is by sacrificing cultists. You return cultists captured in the previous Action Round for 1 power, no ongoing effect. I’ve got everything working except sometimes it adds +2 per cultist instead of +1! It’s not linked to the cultist sacrificed, or the Elder God sacrificing, but it’s dependent on a comparison between the order the sacrificer and the sacrificed are in Global Property files. I did a conga line of cultists going from First to Last faction captured them one each as the Faction before them in order. Everyone got 2 power except the very last guy who got 1 as I wrapped back to the first Faction. Going the other way, everyone got 1 except the first. Taking one from above and one from below, everyone got 3 apart from the first Faction getting 4 and the last getting 2.
The problem happens when I hit the “PrepareSacrifices” Global Key Command. Here’s the whole of the Prototype file in case it’s an order issue, and the two things that pay attention to that Key Command. 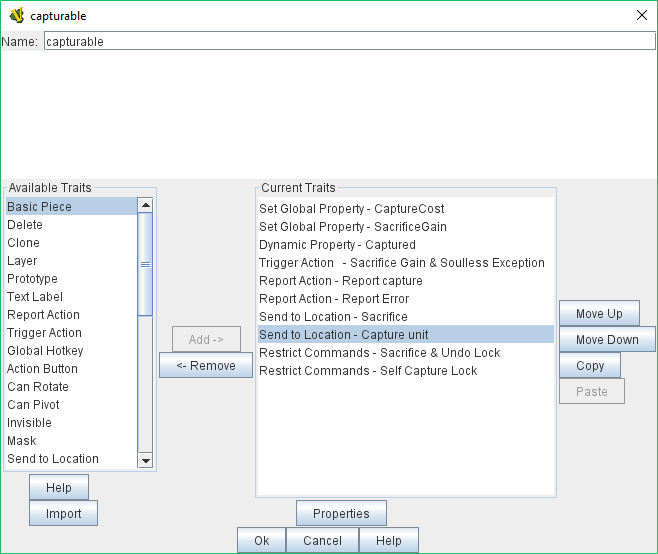 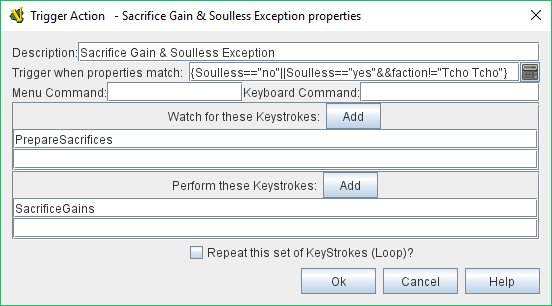 I really don’t know why it would double-up the input based on order. Any help?

I’ve solved it by accident. I threw on a text label to see if there was something weird going on w/ the Capture property and didn’t bother to change the name format, which tends to break a lot of “Send to” orders. Which is exactly what it needed to do to fix it. All of my Upkeep is done by a Faction-aligned Doomrobot sitting in each player’s Faction Window. Combine this with the facts that they sent the piece along before changing it’s Captured property back to “no”. So Great Cthulhu would tally Black Goat’s cultist, then send it along to Black Goat’s screen, who would in turn add it on again. But when Black Goat sent Great Cthulhu’s cultist back to him, the Global Key Command had already passed and so no reciprocity.