I’m working on my first Module. Though I’ve read the entire Vassal Designer’s Guide, I can’t say I remember it all, nor understand it.

I have a board that is blank until hex tiles (cards) are placed on it ( which constitute the real board). Upon each tile are placed pieces or tokens. Then there are added player pieces that explore the board.

I have piece layer traits for each of these, with layer names of Tile, MagicToken, and Player, Tile being the bottom layer. The tiles also have the Mat trait, and the others have the cargo trait.

When hex tiles are placed, and tokens are place atop, everything appears to be fine. The hex tiles can be rotated, so when I select a hex tile to rotate it, it comes to the top, covering any tokens placed upon it. There’s no way I can “push” it back underneath the other pieces. Tiles can also be moved. If I drag the tile as if to move it, I can see in the “shadowy” image there is a token that gets dragged along. But as soon as I “let go” of the tile, the tokens disappear under the tile.

Any suggestions on what’s wrong?

I have piece layer traits for each of these, with layer names of Tile, MagicToken, and Player, Tile being the bottom layer.

It sounds like you intend to be using Game Piece Layers. Can you confirm that you have both the map-level component created and some trait on the pieces themselves (e.g., a Marker trait) that would specify the map layer to which they belong?

What Joel said.
Each map board has to have the layers defined where you want to use them. Then each piece needs to have a ‘Marker’ trait referencing the layer trait and and specific layer. Any piece without the marker will default to the top layer. 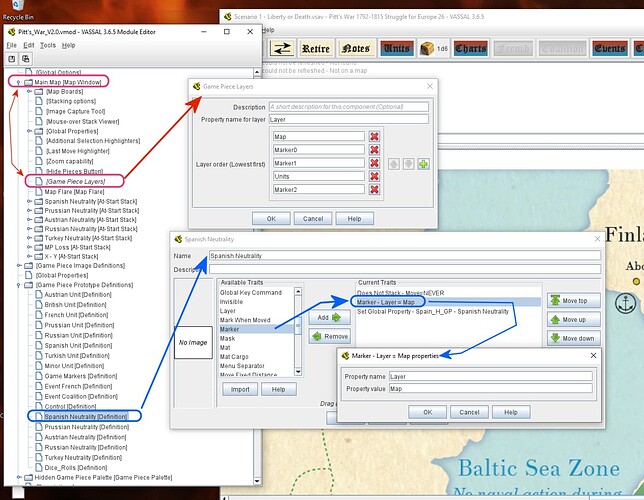 I had confused the Layer trait with the Marker trait. Perhaps more emphasis needs be put on the distinction in the manual.