Restricting Commands for the observer

I can’t seem to find what the exact name of the observer is.

I’ve been forced to open up the mask feature to everyone and now need to re-add the block for the observer. I’m masking on CTRL + F.

I’ve successfully added a restriction on CTRL + F so that PLAYER 1 can’t unmask PLAYER 2’s pieces and vice versa. But the observer alludes me. 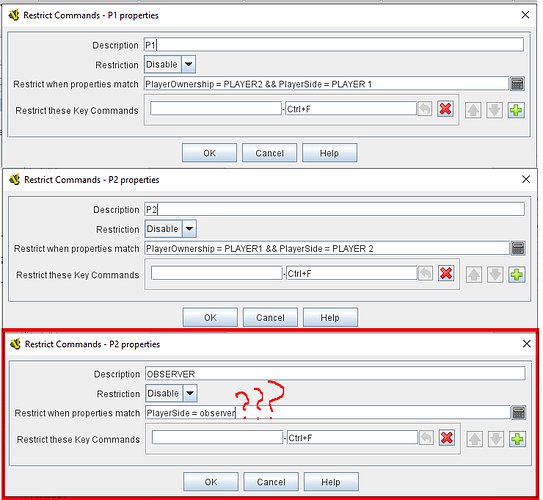 Is this even possible?

Tip for future:
A simple way to find out a value, such as PlayerSide,is to generate a report using the Report Action trait. The report field would have been, in this case, $PlayerSide$

Also, upgrade to Vassal 3.5.8, the latest release (has been out for months).

Ty, I’ve actually tried that but that creates another problem, rather than not working at all. Sorry for omitting this in the first question.

With the right observer name (Can’t seem to type it out it, just disappears) added to the Restrict Commands neither the observer, PLAYER 1 nor PLAYER 2 can use CTRL + F.

Here’s how the Piece is setup:
I’ve tried both positions, the on where it’s at and where the arrow is pointing. Not that i think that this position should matter as long as it’s before the actual mask. 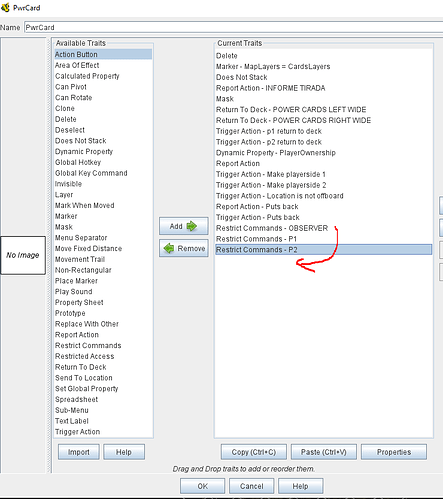 I actually think I’ve solved it by adding a Restricted Access and only Assigning it to PLAYER 1 and PLAYER 2.

This is potentially confusing for new users–it’s best to think of observer status as the state of not being in a defined player side, rather than being its own player side (because it isn’t one).