I have one more question for you all: each of my cards has a unique sound, activated by CTRL+P. The Board sends the command to the cards, and the cards play their sounds when played to the table. Perfect.

Any help would be dy-no-mite.

Not that familiar with sounds but it seems to me this would be a trait order issue. If you have the sound above the Mask trait (or would it be below the Mask trait?) then it shouldn’t play in a masked condition. As far as not wanting the sound to play when it’s discarded, you could use a Trigger Action to activate the sound and have the trigger only activate if…

CurrentMap = (the map where you want the sound to activate)

Thank you for the advice, Dr. N!

Unfortunately, it’s not really working for me. Trait order doesn’t seem to take any effect - with the traits in either order, the sound still plays whether or not the card is masked.

Then, the discarding issue: I confess I’m a little new to zones, but I can’t seem to find a feature in zones that would allow me to say, “don’t have cards play their sound when they come in here” (or the reverse, and have the discard pile outside the zone). Is there a way?

At first I thought I could carve my board up into two boards (the main board and a smaller board with the discard pile on it), then put them seamlessly back together so the eye couldn’t tell. Then have the main board fire CTRL+P, and have the smaller, discard board NOT do so. However, it seems like only maps can fire commands at incoming pieces, and not boards. Is this correct?

It should work. Let’s say you have a deck sitting in a zone called DiscardZone and let’s say your map is called Tabletop.

Then is should skip this command when the card is placed in the deck.

Thank you for the advice, Dr. N!

I can see why it should work, but for some reason it’s not, so I must be missing something here. Here’s a snap of what I’ve got the Trigger Action doing: 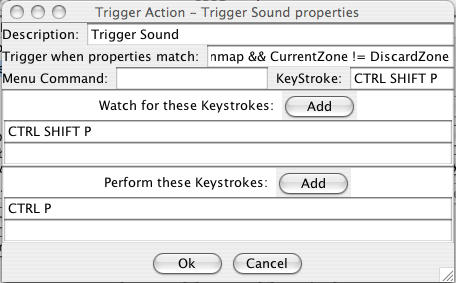 The map’s called ‘Mainmap’, and the Zone’s called ‘DiscardZone’. CTRL+P is the keystroke for the Play Sound trait on each card.

I’m assuming that you have the map properties set to send CTRL SHIFT P to any piece that is moved to the map.

Other than that, I don’t see a problem. Is your play sound in .AVI format? That works best.

Give me a link to your mod and I’ll take a look at it. If you prefer, you can send a link to my E-mail

I misunderstood, and thought that the Trigger Action was intended to replace the command coming from the main map. I put the command back in, emptied the ‘watch for these keystrokes’ field, and the sounds are working as intended.

I am in your debt!