Substituting the image files of an existent module

I find the module for Duel of Ages II has too poor image scans and want to substitute those. I prepared a nice scan of a card, unziped the .vmod, substituted the image and zipped again. When I try to launch the .vmod, Vassal says it is not a supported module. What am I doing wrong? Is this the correct way to edit a module by only substituting the image files?

This most frequently (though not exclusively) trips up MacOS users, because MacOS has a really annoying feature that puts the contents of a ZIP archive into a newly-created folder whenever you uncompress one. The temptation for users who aren’t familiar with the internal organization of a valid module is to recompress that entire folder, rather than its contents.

For instance, this is WRONG: 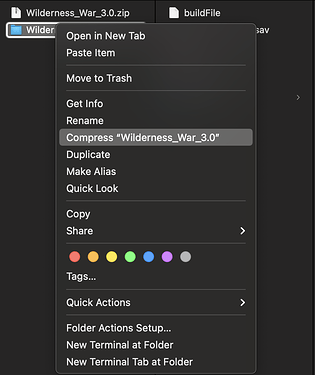 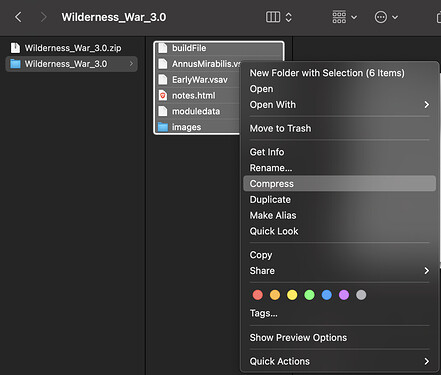 1. How are you trying to launch the module?
First I tried double click the file, but nothing happened. Then I tried in Vassal main menu, File → Open Module → chosen module, but to that I get the message below:

2. Did you rezip the module correctly? The usual cause for a module failing to open after rezipping is that the a director has been introduced containing the files which are supposed to be in the root directory of the module.
Well, I used 7-Zip to unzip and then to zip it again. I changed the extension of the resulting file from .zip to .vmod.

Some more info that may be useful:

I am using Windows. I double checked the structure of the files in the newly zipped container and it is identical to the original module (2 files in root: buildFile and moduledata, 1 directory called Images).

We need to see the (broken) module to help further. I’m 95% sure you have the module structure wrong.

The module is 125MB big. Is it possible to upload it here?

You were right all along. Somehow I missed the root directory created by 7-Zip which is not present in the original module. All good now.