Blah. There are multiple problems with the Carcassonne module; I don’t think it will work correctly with any version of VASSAL after 3.2.17. Due to badly formatted BeanShell expressions (properties enclosed in $$ within the BeanShell, which worked even though they shouldn’t have in 3.2.17), none of the expansion tiles can actually be added to the main draw deck. I’m also not at all sure that custom code is actually being used anywhere–opening in VASSAL 3.5.8, there’s no warning about deprecated code, anyway.

opening in VASSAL 3.5.8, there’s no warning about deprecated code, anyway.

I’m sorry, have you forgotten about our topic?

No, but there’s nothing more for me to do. Someone needs to update the module if it’s going to work with newer versions of Vassal.

That’s what I thought, and that’s why I don’t think that code is actually used anywhere in the module anymore. Not sure how to find out for certain, though.

I’m sorry, have you forgotten about our topic?

For now, for Carcassone to work properly, you will need to install VASSAL 3.2.17 (link is to Windows install), and run it with that old version. You can install 3.2.17 alongside the current version by selecting a “Custom Install” from the installer. However, for 3.2.17 to work properly, you also need to have a Java Runtime Environment, version 8 or earlier, installed, which could be a pain to set up.

If I can verify that the custom code isn’t actually needed (or someone can update it for me if it is), then I can probably update Carcassonne for 3.6.x pretty easily…

Edit: Please don’t bother trying to get VASSAL 3.2.17 working, as the module has now been updated–see further below.

The custom code is used. I see it referenced in the module’s buildFile. The required change is going to be a single line, so could probably be done by decompiling the offending class, making the edit, and recompiling it.

. Can you explain it in a more understandable language

From everything you wrote, I only realized that Carcassonne has very outdated code that will be difficult to update and future fans of this game will not be able to try out this game soon. Is that right?

Carcassonne has very outdated code that will be difficult to update

No, the opposite. Updating the custom code should be trivial—it’s likely to be a change of a single line.

Oh, does it mean that this module will be updated soon?

Not unless someone volunteers to do it, no.

Okay, to hell with him, with this Framework, he’s alone, but what do you advise to do with the rest of the modules? Those that weigh more than 2 MB do not open, and it does not even depend on the time - at least 2 minutes, at least 7 hours (I tried)

Those that weigh more than 2 MB do not open, and it does not even depend on the time - at least 2 minutes, at least 7 hours (I tried)

That’s a completely different problem; it’s not related to the deprecated code.

First, make sure you’re using Vassal 3.6.3. Second, if you still have this problem with 3.6.3, post the errorLog. (Instructions for finding the errorLog are here.)

Is there any chance that I just need to update java. My java version is 17.0.1

On Windows, Java is bundled with Vassal. Updating the Java you have installed will have no effect because Vassal doesn’t use it.

It still doesn’t help. I highlighted what was highlighted after the start of the module opening 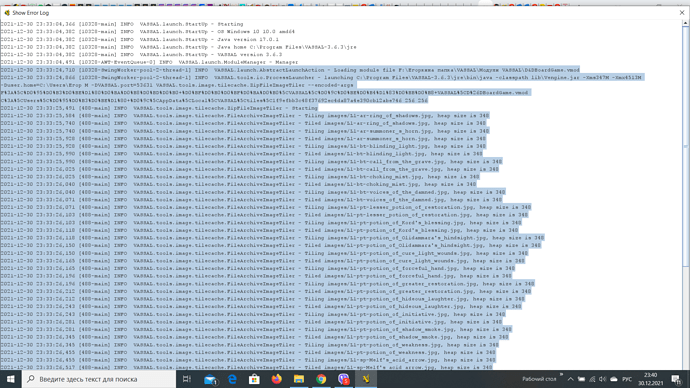 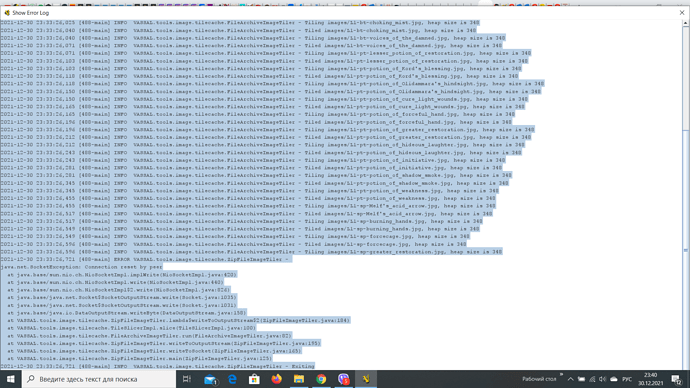 It looks like something is blocking the image tiler from communicating with the main process. Are you running some sort of firewall or antivirus program that could be doing this?

Yes, I use ESET antivirus, but I don’t know if it affects it

Does ESET show that it’s blocking anything? Does it make a difference if you turn ESET off and try to load the module?

He himself did not highlight anything, did not show it. I turned off the antivirus for 10 minutes, it is still turned off, but there seem to be no changes 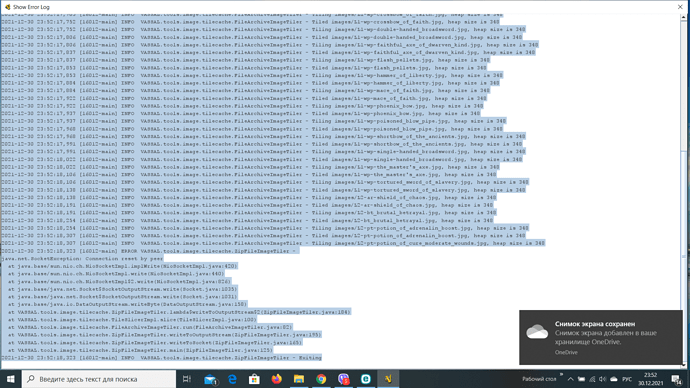 I will need to investigate this problem. Please be patient.