First off - KUDOS to the developers… Most of the things I found lacking when I started using Vassal have been added, enabling a bunch of awesome usability enhancements (particularly the die roller enhancement, ability to gray out toolbar GKC, and setting Old$ variables for units that have never moved).

The following are mix of things I have either wanted for existing module development or things I have thought about for developing a future original module.

I can see how that could prevent inadvertent mismatches. How could that improve security?

consider adding in a set of standard symbology for wargames (i.e., NATO X for infantry, oval for armor, slash for cavalry). Again very helpful for new designer to not have to hunt for this stuff on internet.

This has always existed (at least in rudimentary form) in Game Piece Image Definitions.

If the saved game checksum doesn’t equal the checksum in the module of each player then it indicates that something has changed (especially if the 1st tier test of module name and version doesn’t show a mismatch). This might indicate an undocumented change in one of the player’s modules, which could be a cheat edit.

Tested on 3.6.5 and Europe Engulfed Module and not working…

Checking both At-Start-Stacks using “Reposition stack” neither shows any other stacks.

The 2nd At-Start-Stack is doubly bugged as it doesn’t even show all 3 units, but just a single unit.

Fix Turn Counters. They work great when using only 1 and have many bugs when using more than one. Or disallow more than one and create something similar that is designed for multiples.

Is there an issue in the bug tracker for this one?

Re Turn Counters - unsure if there is a issue noted in bug-tracker… I flagged it back on the old website and after spending a ton of time trying to get them to work, ended up deleting all of them but the basic turn counter and re-implementing them as units.

From memory, problems with docking multiple counters, problems with some not decrementing correctly, weird formatting problems, etc. Several of the bug reports never got a response…

If you want somebody to look into this, write up a bug report giving steps to reproduce the problem, or find an existing bug report and point that out to us.

Brent’s already working on some mismatch checking, but it won’t be ready for 3.6.6: 11071 checksum improvements by BrentEaston · Pull Request #11261 · vassalengine/vassal · GitHub

Regarding the bugged multiple turn counters, I will look in my archives and find one of the early development modules that exhibit this behavior and (assuming it is till buggy in 3.6.5) upload it and point you to it…

A post was split to a new topic: Turn Tracker bugs

11 posts were merged into an existing topic: Turn Tracker bugs

My wish would be for map wraparound, eliminating the need to scroll left/right to get to the map edges. I play World in Flames, and full games use 5 maps (americas, west and east european, asia and pacific). Scrolling left/right often is a bit of a pain.

If this were taken up, I would want it to be a player preference, as I believe many players (including me) would prefer the current behavior.

Agree with that. One must take into account user preferences.

consider adding in a set of standard symbology for wargames (i.e., NATO X for infantry, oval for armor, slash for cavalry).

This has always existed (at least in rudimentary form) in Game Piece Image Definitions.

I tried this out today (wasn’t previously aware of capability) and found a small bug associated with this, but it has a fairly easy work-around.

If you create a new image using the Game Piece Image Definition tool, the image is NOT available to use for creating a new piece prototype until you save, exit, and reload the module.

the image is NOT available to use for creating a new piece prototype until you save, exit, and reload the module

That’s a known limitation of GPI’s. That won’t change in V3.

Tested on 3.6.5 and Europe Engulfed Module and not working…

Checking both At-Start-Stacks using “Reposition stack” neither shows any other stacks.

The 2nd At-Start-Stack is doubly bugged as it doesn’t even show all 3 units, but just a single unit.

None of the “reposition stacks” buttons ever show more than one unit in the stack or deck – that part is always the way it has been.

Other than that I have been unable to reproduce a problem – with latest Europe Engulfed Module in the 1940 window, I can open one of the at-start stacks’ properties, click Reposition Stack, and then when I check the “show other stacks” box the other stack positions appear.

Let me know if there are different steps you are taking that end up producing a problem? (Maybe when things are done in some different order things don’t work?) 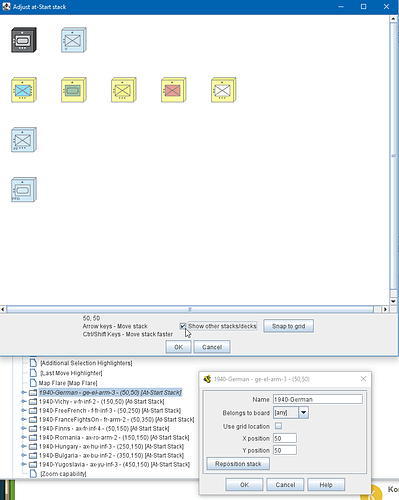