Every map has a “MOV” button with a a tooltip “Mark all pieces on this map as not moved.”

However, there appears to be no corresponding entry in the editor for this button (i.e., hard-coded into the engine).

Is there a “hidden” GKC to be able to trigger this button? Virtually every other button in Vassal has a way to associate a GKC or GHK…

The Mark When Moved and Movement Trail traits on the pieces themselves have a Key Command to clear the mark/trail; you can trigger these with a GKC.

The Mark When Moved trait appears to only have a single Key Command/Keyboard Shortcut which can be associated with the menu item.

Currently, if you use the Menu item it toggles the move status ON/OFF.

If I were to issue a GKC with the “Mark When Moved” key command, I would expect it to toggle everything from ON to OFF and OFF to ON. Whereas I want to globally set everything to OFF.

Your description is correct for the Movement Trail trait; Mark When Moved, however, just clears the movement flag and erases the trail, exactly the same effect as clicking the button on the map window.

If you bundle the map clear-moves button into a multi-action button, that would be another way to get the GKC hook you’re after.

The map move button will be replaced by whatever image & name you give to the multi action button.

Mark - I’m not following your point… There is no entry for the standard “clear move” button in the editor… This appears to be hard-coded functionality… So I don’t see any way to bundle this, change it’s behavior, etc.

Which maybe brings up the point - SHOULD it have a (non-deletable) entry in the editor, rather than being implicit… That would allow it to be moved, etc.

Mark - I’m not following your point… There is no entry for the standard “clear move” button in the editor… This appears to be hard-coded functionality… So I don’t see any way to bundle this, change it’s behavior, etc.

Hope I’ve understood the issue, so here’s some more flesh on the bones of my reply by way of an example…

Here’s a map definition of Mark Unmoved; as you point out, no Hotkey can be specified:

In the map definition, I have included a Multi-Action Button “Reset the Board”… 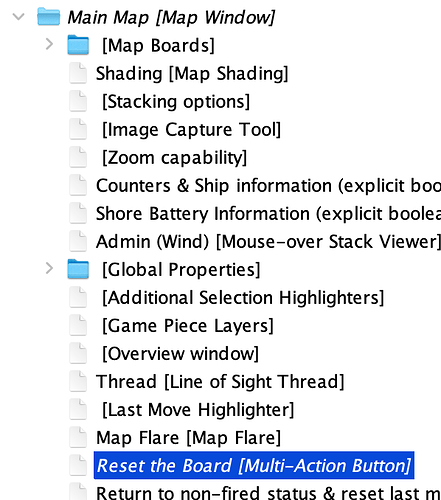 That Multi-Action Button, includes the Mark Unmoved button (and other stuff, which you can ignore); note how the MA Button allows a Hotkey to be specified… 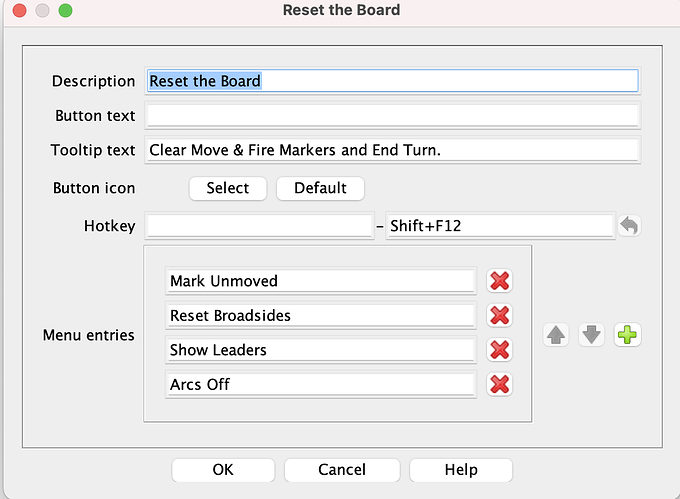 Does that help or have I misunderstood the problem?

However, there appears to be no corresponding entry in the editor for this button (i.e., hard-coded into the engine).

Hmm… I think I have misunderstood; my previous reply shows the button entry in the editor (map configuration panel).

Hi there. I used a GKC called ‘final reorg’ that triggers a bunch of other GKCs. One of these is does a global ‘set the moved marker to off’. While ‘control m’ is a counter trait, just issuing ^m will only toggle the ‘has moved’ trait to on if off or to off if on. Counters can also be on maps other than the main maps. I resolved this problem by adding an ‘Additional matching expression’ in the GKC - {(CurrentMap==“World Maps”||CurrentMap==“AmericasCE”||CurrentMap==“AmericasAiF”||CurrentMap==“Allied TFs”||CurrentMap==“Axis TFs”)&&Moved==“true”}. The key part of this expression is the ‘Moved==“true”’. Everything runs fine and only counters with an active ‘moved’ attribute are affected by that GKC. I hope this helps. 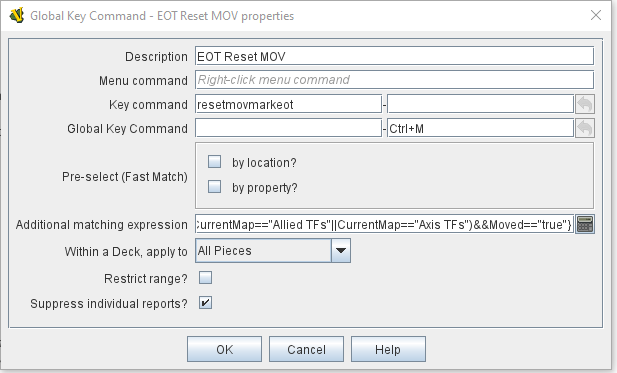 Just FYI in case it makes maintenance of long expressions easier, this shorter expression is identical:

Joel, Thanks for that insight. I have not being able to get that system working, but then I do not think I was using the =~. I shall have to keep that trick in mind when I revisit my equations/formula.